Family history and genealogy is full of it. Whether or not we believe in magic or fairies  sometimes  something will take pity on us and put us out of our misery and while we are researching something,  that elusive ancestor will pop up living next door to a totally unrelated person we are looking at in the 1851 census.

When I was researching Annie, one of my first posts on the blog, I was surprised to find that I had actually visited her home before as  it is now the veterinary surgery I take my cat to. Not that Gingercat is very impressed.

While I was researching Esther (see previous post) I found that her brother Archibald was killed in World War One. I spent an afternoon trying to find out which local war memorial his name was recorded on. There was a choice of two churches it could have been at. I emailed Penshurst church and they said no he wasn’t listed there and to try Speldhurst Church.

So I actually drove to Speldhurst to look for myself – but he wasn’t mentioned on the memorial there either. I did have a look around the church though as I hadn’t been there before and it is well known for its windows that were  designed by William Morris and they are indeed worth a look. 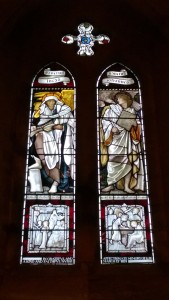 I had also tried to discover where Esther was buried, I had a date of death for her and her husband but I had no luck in finding her last resting place.

I did find a mention of her father Edgar Child’s funeral in a local paper, it was held at a tiny  chapel that I hadn’t heard of before. I wondered whether there was a war memorial there with Archibald’s name on so yesterday I dragged the family and the dog over to the chapel to have a look.

There was no memorial there so I had a quick look for Edgar and his wife Harriet. No sign of them.  I was about to give up when who should I find right beside me but Esther herself, quietly waiting with her husband and daughter for me to find her. 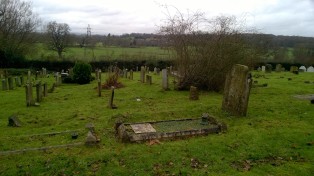 Esther’s grave with her childhood home in the distance.

As we left I had a quick glance round for interesting headstones and one caught my eye, that of Hope Constables wife, Emma Ann Lewis.

That evening I sat down to see what I could find out about Hope and his wife. The first thing I discovered is that  he was a builder and brickmaker.  And amongst the many buildings he built was Speldhurst Church. Yes, the one I had visited and admired for the first time a couple of days before.

The second thing I found was that his 12 year old daughter Ama Beatrice drowned in the river beside the family home. But that’s another story. 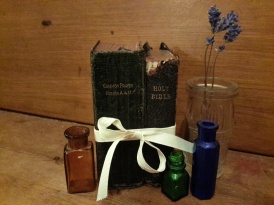 I spotted this small bible and the common prayer book laying side by side on the table, obviously trying to get my attention by flapping their pages about in the breeze. And (as much as I tried to resist) of course I ended up picking one up. Inside it read  ‘To Mother with best love from Esther. Christmas 1910.’

Not much to go on there so I put it back down.

Then I picked up the bible. ‘To Esther A E Childs from her sister Belinda. Christmas 1903. The Lord bless Thee and keep Thee.’

So now I had given myself a dilemma. Do I buy the book with the inscription? and if so do I leave the other book behind which Esther has given to her mother? Arghhh!

So I asked the stallholder how much he wanted for the bible. He took a quick look at it and told me he thought it once belonged to someone in his family. And then asked a couple of quid for it.  And then even though the other book had no other information to give me I bought that too because I just couldn’t bear to split them up.

It took me a while to find out about ‘Mother’ and her two daughters – their surname is sometimes spelt with an s on the end and Belinda isn’t really her first name – she was baptised Clara. But eventually I tracked them down and here is a little peek into their lives.

The Autumn of 1888 is remembered for its connection to the Whitechapel Murders, and at the same time Jack was finishing off the last of the Canonical Five, a little girl was being born in the small parish of Penshurst in rural Kent, about 30 miles south of London. The little girl was named Esther after her paternal aunt.

The village grew up around the medieval manor house Penshurst Place which today is partially open to the public. And apart from seeing many a royal visit and being owned by kings and earls  some of that film The Other Boleyn Girl was filmed there (but maybe we will forget about that last ‘claim to fame’…! )

Esther’s father Edgar worked on one of the many farms within the parish as a carter and her mother Harriet tried to keep the household running smoothly with three growing sons at school, a small daughter and now a newborn baby to contend with. Another daughter would follow a couple of years later to complete the family. The couple were luckier than many – all six of their children survived childhood.

Both Harriet and Edgar were born in the village. They were married in the parish church, just a few minutes walk from the family’s cottage, where their children would later be baptised. The children all attended the small village school and Edgar remained at the farm for his entire working life. All in all they were just an ordinary hardworking family.

Belinda was the first child to leave home, in the 1901 census she is living with a family in the village working as a maid. Also in the household is 16 year old Mary Mortlock who is the family’s cook! I’m not sure I have ever seen a cook as young as her. If I had been Mary the whole family would have dined on scrambled egg on burnt toast frequently.  That and burnt tinned soup.

Belinda was married in 1906 (maybe the food drove her away?) to Frederick, a signalman on the main line to London,  and moved away from the village to a workers cottage near the railway in the local town. Belinda and Frederick had several children.

The three sons of the household remained at home until they married, Henry was a builders labourer, Archibald a gardeners assistant and the youngest, Alfred helped with the horses his dad used on the farm.

Esther went to work as a domestic servant for a family in the village. She would have had a great many duties including perhaps making beds, cleaning carpets, laying and lighting the fires, emptying chamber pots, washing up, laundering, ironing and mending  clothing, cleaning floors and windows, helping to prepare and serve meals. The list of jobs is endless. Add to this that the family ran a grocer and draper shop and we might find that Esther sometimes had to work in the shop too.

But I suspect she must have had a little time to herself occasionally because on Saturday the 12th of April 1914 Esther Annie Elizabeth got married to Frederick, a local bricklayer.  She wore a cream taffeta dress with white lace and silk,   her sister Grace was the chief bridesmaid and wore blue and her two young nieces (complete with silk bonnets) carried white flowers tied with pretty blue ribbons behind the bride into church.

The three sons of the family joined up during the First World War and Archibald was badly injured twice whilst serving in France before going missing in April 1918.  A small article about him, along with his photograph, appeared in the local paper with his distressed wife Hannah asking for news of him from his comrades. She was later was informed he had been killed in action and she received the  £19 17s 4d back pay owed to him, followed by his service medals.

Archibald may not have known about the death of his father, Edgar died aged 65 in January 1918 following an operation in hospital. His funeral was attended by a great many people, he was obviously a very well thought of man.

Grace was now the last of the siblings remaining at home, and I can’t imagine she had an easy life – perhaps she helped keep house for her widowed mother, spent caring for relatives in the village or helping around the farm if she was able to get some work there. With her siblings all supporting families of their own, money would have been tight. Harriet and Grace remained in the family home until Harriet’s death in 1920 and shortly after this Grace was married.

Both Clara and Esther survived their husbands by many years and lived well into their nineties.

I don’t know how the books remained together for such a long time, someone obviously looked after them. And now they are sitting next to each other on my book shelf. But should they be on yours?

Posts from the past…