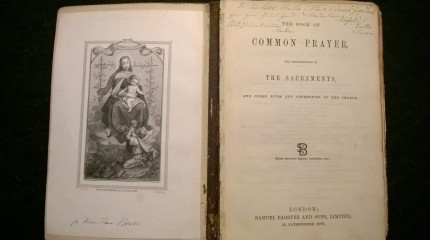 I sometimes worry what the librarians at my local library must think of me.  My list of reservations must look very odd. Mostly full of books about Victorian death, disease, hospitals, murder, cemeteries, railways, murder again, adultery, asylums and prisons, interspersed with ‘The day the crayons quit’ (brilliant book!) and ‘The Twits’ (ditto) and various other children’s books for when my daughter and I have forgotten her card. I will put my hand up to the ‘Little House on the Prairie’ though 😀

I am finding that when I begin to research a new item I am heading straight to my library account and reserving yet another book.

Well this week is going to throw them!

The item I have chosen  is a Common Prayer book that was given to Albert Early for his birthday. It doesn’t have a date on it but I have managed to narrow it down by census to the 1890’s. He was born on the 19th of January 1888 and he lived with his family in a quiet village near Battle in East Sussex.

I  began to research ‘Little Bertie’ as he is called on the flyleaf of the book but I found myself returning to the inscription again and again so I decided to see what I could find out about the giver of the birthday present.

It did take me a while to decipher the signature (L Leila L Coutwith Waterhouse Hawkins) but after finding Albert on that 1891 census entry and a quick search I had confirmation of the lady’s identity, Louisa Leila Leezinka Waterhouse Hawkins.

Louisa, although I think she preferred Leila so I will call her that, was born in 1842 in London. She was the eldest daughter of Frances ‘Louisa’ Keenan, an artist, and Benjamin Waterhouse Hawkins who was a sculptor and natural history artist. Her younger sister Margaret was born in late 1847.

In 1851 the Great Exhibition was opened in Hyde Park, London.  It was only a few minutes walk from the family home in Paddington and no doubt Leila, who was 9 at the time, would have been able to see the huge glass structure that everyone was calling a marvel, a crystal palace. It was designed for various Countries to show the best of their industry and it must have been an amazing experience to visit it at that time.

After the exhibition was closed in October 1851 it was moved some miles away and across the Thames to Sydenham where it was rebuilt and incorporated within a much larger structure.

Leila’s father Benjamin, who by now had become very interested in natural history and geology,  had been working alongside many famous biologists and  paleontologists. He was commissioned to create 33 enormous extinct animals for public display. He retreated to his  studio for  two years and sculpted the huge life sized mammals and dinosaurs which were to be  displayed within the grounds of the new Crystal Palace Park.

After a lavish dinner actually inside the structure of one of the animals on New Years Eve 1853 the collection was opened to the public and Benjamin and his creations were a roaring success.

Dinosaurs were a fairly new discovery at the time – their remains having been first discovered only about 30 years before, so while Benjamin’s finished work is not accurate in our modern times it was impressive to the Victorians. I visited the park many times as a child as I grew up nearby, and I can still remember seeing those big scary monsters hiding in the foliage!

Leila took after her parents artistically.   In 1858 aged just 16 she exhibited her work for the Society of Female Artists in London.  She became a Student of the History of Fine Arts. She entered and won painting competitions. She had a bright future ahead.

Things began to go wrong for the Hawkins family in the early 1870s. Frances discovered she wasn’t the first Mrs Hawkins. In fact she discovered she wasn’t the only Mrs Hawkins. There was another one and she was alive and well. It seemed Benjamin had married Frances when he was already married and a father to 6 children.  It destroyed the relationship and Benjamin left the family to work in America.

Margaret was next to leave the family home, she married and moved away.  I have been unable to find her in later life.

Now it was just Leila and her mother. The two woman left behind life in London and moved  to the quieter, picturesque south. They seemed to live with various unconnected families in Sussex, Leila continuing to earn her living by painting .

They must have had some contact from Benjamin because, after the death of the first Mrs Hawkins in 1880 and Benjamin now being free to marry – he decided to marry Frances, legally this time in 1883. The couple never lived together again so perhaps they married to legitimize their children.

After Frances’ death in Brighton in 1884,  Leila settled in and around Battle, famous for its abbey built on the site of the Battle of Hastings. This is where I found her in 1891, boarding at the home of  Frederick and Emma Early and their five children in a village  just outside the town .  I think she enjoyed her time with this family, perhaps it reminded her of happier times.

In July 1912 Leila was admitted to the County Lunatic  Asylum in Hellingly  East Sussex.  She had been living in a beautiful house in the centre of Battle and still classed herself as an artist the year before even though she was approaching 70.  She died at the Asylum a few weeks later.

I really do hope she had a good life, but I can’t be sure.

Benjamin passed away in 1894 and is buried in Putney, London. I have been unable so far to locate Leila’s last resting place.

The whole family seems to have been scattered by the wind and lost.

I’m off to reserve some dinosaur books.  And top of my list is Barbara Kerleys Dinosaurs of Waterhouse Hawkins…. for my daughter of course 😉

Update 26th October…..   I just had to go back and visit those dinosaurs! So spent a lovely day with my whole family wandering round the park ☺ 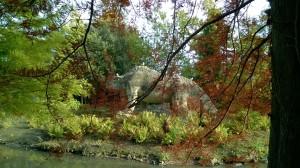 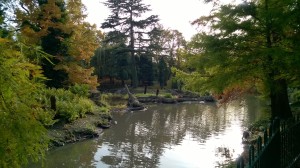 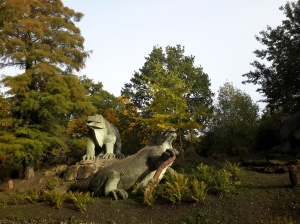 Posts from the past…